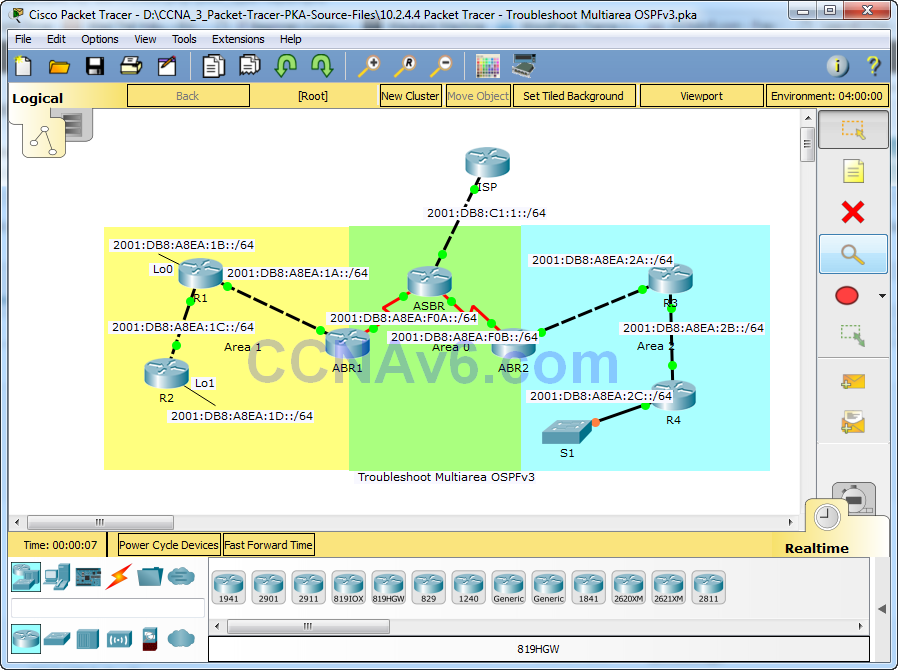 A large organization has recently decided to implement a multiarea OSPFv3 network. As a result, the network is no longer functioning correctly and communication through much of the network has failed. As a network administrator you must troubleshoot the problem, fix the multiarea OSPFv3 implementation, and restore communication throughout the network. To do this, you are given the Addressing Table above, showing all of the routers in the network including their interface IPv6 addresses. You are told that in Area 1, R2 is unable to form OSPF adjacencies. In Area 0 and Area 2, three routers ABR2, R3 and R4 have not been able to form OSPF adjacencies. Lastly, ABR1 and R1 have not received default route information.

Instructor Note: Refer to the Instructor Lab Manual for the procedures to initialize and reload devices.

In Part 1, using the particular symptoms of network failure reported in the Background / Scenario begin troubleshooting configuration settings at the routers in Area 1.

a.  Because R2 is not forming an adjacency with R1, console into R2 and check its interface IP address configuration and its multiarea OSPFv2 configuration. Use the show running-config command to view the configuration.

Is R2’s OSPFv3 routing process configuration present and correct? Has OSPFv3 been activated on the g0/0 and Loopback 1 interfaces and have they been set to the correct Area?

R2’s OSPFv3 routing process is enabled and the interfaces are configured for area 1.

b.  If R2’s OSPFv3 configurations are correct, it is possible that OSPFv3 has not been configured on the R1 G0/0 interface. Console into R1 and issue a show running-config command to check the G0/0 interface for the ipv6 ospf 10 area 1 configuration.

Is R1’s OSPFv3 routing process configuration present and correct? Has OSPFv3 been activated on the g0/0 interface and set to Area1?

Is there a mismatch or incorrect configuration on either the R1 or R2 hello-interval or dead-interval timers?

Yes, there is a successful adjacency change to FULL with Nbr 1.1.1.1.

Step 2: Check the router configurations in Area 2 starting with ABR2.

a.  Because it was reported that routers ABR2, R3 and R4 were all unable to form OSPFv3 adjacencies, console into the ABR2 border router to see why it is unable to form an adjacency with ASBR router.

Is ABR2’s OSPFv3 routing process configuration present and correct? Has OSPFv3 been activated on the s0/0/1 and g0/1 interfaces and have they been set to Area2?

ABR2’s OSPFv3 routing process has been enabled but a router-id has not been set. The interfaces have been configured correctly.

b.  OSPFv3 requires the presence of a 32bit dotted decimal router-id. Because ABR2 has no IPv4 addresses assigned to any of its interfaces, a router-id needs to be manually configured. Configure ABR2 with a 6.6.6.6 router-id.

If the problem has been corrected, syslog messages should appear in the console showing OSPF adjacency changes from LOADING to FULL. State if this is the case, and what neighbor Nbr addresses appear?

c.  On ABR2, a Syslog message showing an adjacency change from LOADING to FULL with Nbr 3.3.3.3 means that R3 is now participating in the OSPFv3 Area 2 process. Check that R4 has provided route information for its connected networks to the OSPFv3 topology database.

a.  Because ASBR is the edge router, it should have a static IPv6 default route configured. If so, it can distribute that route using OSPFv3 and a default-information originate command.

Is there an IPv6 default route configured on ASBR? Does the OSPFv3 routing process configuration have a default-information originate line present?

Yes ASBR has an ipv6 default route to ::/0, but the IPv6 OSPF 10 routing process does not contain a default-information originate line.

b.  On ASBR, add a default-information originate command to the OSPFv3 routing process.

c.  Check the IPv6 routing tables of ABR1 and ABR2 to see if the default route was discovered through OSPFv3.

Looking at the output of the show ipv6 route, did the router learn of the default route from OSPFv3? If so, list the line or lines that signify this.